While going through some old folders on a old backup disc I found this little drawing: 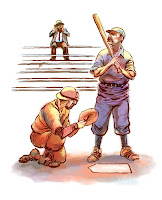 Consulting the creation date on the file it appears that this was completed in November of 2004. I do remember this ran with a historical piece which was about a game where only ONE fan showed up. I don't recall if it was a pro game and I don't recall when the game took place-- I have a feeling it was before the Babe played but I couldn't say for sure.
....I haven't found a hard copy of this in my stack of yellowing paper clips and I don't know how it was used in the paper. This is one of those moments where I've found something I would never have thought about again and I don't have a vivid memory of doing it. There is a sense when I look at it that it could be someone else's work. Kinda cool when that happens.
....I'm intrigued by the artist's use of color. There is a dreamy quality to it that I haven't seen in his other work. I wonder how he did it!