I drew this the other day. I'm pretty happy with it. Five caricatures and they each kind of look like who they're supposed to look like. A resemblance to the person being caricatured is one of the most vital parts of a caricature, or so I've been told. Ha!

I've mentioned before that I don't have a lot of confidence in my caricature skills. I seem to do okay, but I begin each one with fear, doubt and a healthy portion of dread.

Larry Ellison was the hardest one. He's got the most character to grab onto but my first version looked like an angry Abe Lincoln – I didn't show that to anyone. My second attempt was rejected because he looked too mean and we shouldn't editorialize too much when operating in pure illustration mode. The final one here doesn't look as good to me as the angry one, but it's alright.

Page designer Daymond Gascon put together the information bits and made a great page of it for the paper! It looked like this: 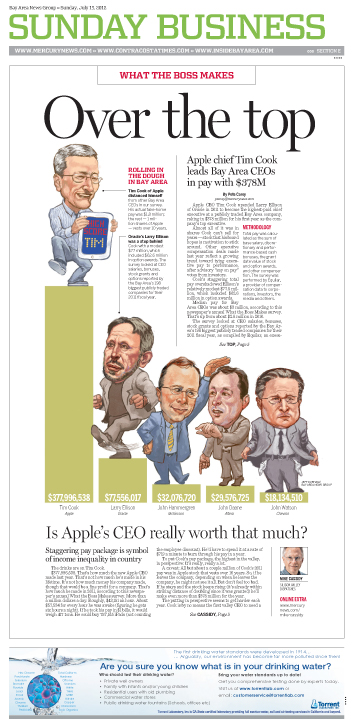