This painting was one of my first start-to-finish all-digital illustrations. I worked at 5400 dpi in height, on a lime-green imac, so it was very slow going to say the least.

I recall fighting through crashes and error messages complaining about how there was not enough space available to save changes. I had to save to a zip disk every time, and those things weren't all that reliable. Often, after saving to a zip, I would be unable to open that file. "Disk error!" it would say. Things are a little better now. Enough complaining.

Rough doodles
I had just finished my "Iron Apes of Mercury" painting (see my website or wait a week or two-- I'll post a step-by-step of that one soon) and I wanted to do another in that vein-- a sci-fi paperback cover.

I was designing, of course, to make allowance for the title and author's name but, since this was an imaginary project, I figured I could just change the title until it fit nicely. 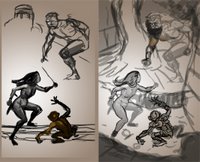 . . . .
Lion-Man
After I had an idea as to what the layout would be, I transfered the roughs of each of the three main characters into their own files; this was to cut down the save time and the pen-lag by giving them their own documents.

I'm guesing I didn't care for the more lion-like face that I started on and tried to make in more "man" than "lion." If I were to do it again I would design the face more like the first one, more lion-like, although maybe it looks too much like the "Beauty and the Beast" guy.

. . . .
Monkey
I like monkeys. Who doesn't? Wouldn't it be great to have a monkey? Probably not. Imagine your dog or your cat, only a lot smarter and with hands! What a nightmare that would be. But, a robot-monkey? Now we're talking.

Since I was imagining this book as a sequel to the "Iron Apes of Mercury," I imagined that the heroine of these stories had, during that riveting adventure, picked up a little tin sidekick: a tinpanzee! Sadly, he sacrifices himself to save our heroine's life during this story and thus, I don't have to paint him in the next one.

. . . .
Amanda Rose
I read quite a few sci-fi/fantasy novels during my early years-- and for one particular series the hero character in the cover painting on book one looked nothing like the same character on the cover of book two, and so on through three and four. It didn't occur to me that they might have been published at different times by different publishers-- what did I know?

But, in the spirit of the sense of confusion I felt, when I started on this painting I decided to purposefully make this depiction of Amanda Rose different from the first. Perhaps I should have given her a more unusual outfit, something weirder and much more fantastic, but in this case, it doesn't distract from the whole.

3 steps
What I did here (I think) was I brought the individual characters in and merged them onto one layer over the roughed-in background. There were discrepancies in brightness and color between the three of them and the background, so I believe I created another layer, filled it with some green and set it to a low transparency, and it sort of unified everything. I didn't know anything about levels and curves at the time, so it was the best invention I could come up with-- just like a transparent glaze in oils.

The following three snapshots show how I wrestled with figuring out how to light it and how to render the various bits, probably selecting areas and tweaking them with the brightness/contrast slider.
. . . .
Final
I clearly remember deciding to do one of these covers for each planet. Mercury, done; Saturn, first version of that was done; Neptune, I was working on Neptune as I finished this one: and this one was going to be called "The Lion Men of Mars" because it sounded good. I was avoiding the whole "Uranus" thing. You know why.

As I was placing the title on the final I decided this would be a good one to use for Uranus and I changed it. I simply had to get it out of the way. It was weighing on my mind. Could I come up with a name for the fake Uranus novel that wouldn't make me giggle? Probably not. But "The Lion Men of Uranus" for some reason was not as ridiculous as, say, "The Seven Serpents of Uranus," or "The Bee People of Uranus."

See? So there. Done.