It's inspiring to see so many people doing so much work and posting it with such frequency. I'm going to try to set a pace for myself that-- while not quite as heroic as some-- will get me to exercise some muscles that have atrophied. TWO posts a week! Either I'll make it or blow out the artistic hamstring. No crying allowed.

Hopefully this will keep me from overworking things-- nothing worse than laboring three weeks on something and then noticing that you're painting the toenails on the lifeless corpse of the great idea you had way back when. 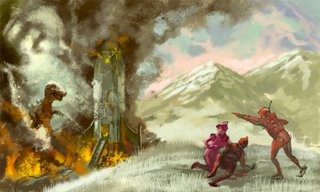 So here is my mid-week attempt in a state of unfinished-ness but I'm posting it anyway. I may re-adjust later. I may just give up on it and leave it. Or delete it.